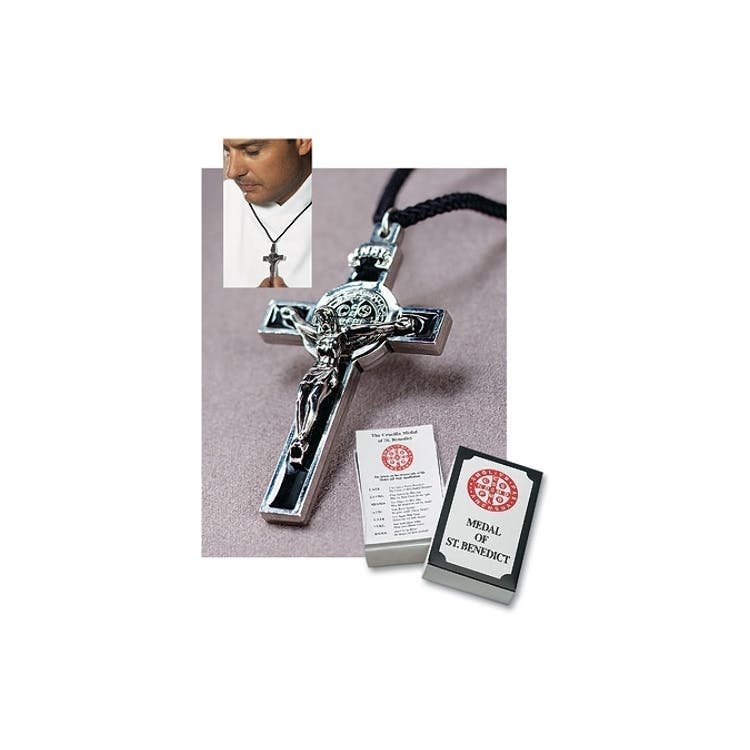 Production Time: 1 Working Days
$14.43 each
St Benedict Pendant on CordThe Saint Benedict Medal is a Christian sacramental medal containing symbols and text related to the life of Saint Benedict of Nursia used by Roman Catholics as well as Anglicans Lutherans Methodists and the Western Orthodox in the Benedictine Christian tradition. The medal is one of the oldest and most honored medals used by Christians and due to the belief in its power against evil is also known as the "devil-chasing medal". As early as the 11th century it may have initially had the form of Saint Benedict's cross and was used by Pope Leo IX. In widespread use after its formal approval by Pope Benedict XIV in the 18th century the medal is used by Roman Catholics to ward off spiritual and physical dangers especially those related to evil poison and temptation. -- This popular pendant comes in a gift box with a card explaining the meaning behind the pendant's symbols. Includes a black enamel background finish and a matching black cord for wearing around the neck.

Note
Must be ordered in increments of 4

©Copyright 2006 - 2020 Safety Magnets®. All rights reserved. Disclaimer. All artwork and illustrations are the property of the Rasey-Nickell Group, L.L.C. (d.b.a. Safety Magnets) and can not be reproduced without permission. All trademarks and logos are property of their respective owners.
For licensing information or to distribute our products, please contact us.